Is a lack of broadband hurting economic development in Greater Minnesota? 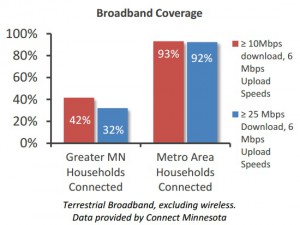 In the Twin Cities metro area, 93 percent of households have access to high-quality, high-speed broadband. However, when you venture out to Greater Minnesota, the number of households connected to reliable broadband service drops dramatically, down to only 43 percent, according to data provided by ConnectMN. As the Internet becomes an increasingly important tool in all aspects of economic development (business, education, health care, etc.), it’s no surprise that many of the attendees at the Greater Minnesota Partnership’s regional meetings have expressed a desire for better broadband access.

Gary Evans, a member of the Partnership’s Board of Directors, addressed the importance of high-quality broadband in an editorial published today in the Bemidji Pioneer, which can be read here. In his editorial, Evans, the former president and CEO of Hiawatha Broadband Communications and a current vice president at Winona State University, noted that while some Greater Minnesota communities (like Bemidji, for example) are already equipped with broadband service, many others have yet to get up to speed. He added that the lack of broadband hurts economic development in Greater Minnesota as a whole, even communities that are already connected, because it prevents businesses from reaching potential customers or clients who live outside of city limits.

The broadband debate will likely be a topic of discussion at the Partnership’s remaining regional meetings (Oct. 29 in Baxter and Nov. 1 in Worthington). The issue will also be considered by the Partnership’s Board of Directors when it convenes in the next few weeks to set its priorities for the upcoming legislative session.

Is a lack of broadband an issue faced by your business or community? Do you think it is something the Partnership should consider when it sets its priorities for 2014? Please let us know your thoughts by contacting Executive Director Dan Dorman at dan@gmnp.org.