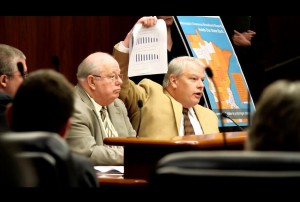 Legislation that would create a $100 million Broadband Infrastructure Fund passed its first committee hearing today. HF 2615 (introduced by Rep. Erik Simonson, DFL-Duluth), which aims to bring high-quality broadband to underserved and unserved parts of the state, was heard in the House Labor, Workplace and Regulated Industries Committee. The GMNP played a key role in passing the bill out of committee.

GMNP President Gary Evans was the first to testify at the hearing. He said that without government assistance in laying the essential broadband infrastructure, particularly in isolated areas, “Greater Minnesota…cities will be left behind.”

The next testifier was GMNP Executive Director Dan Dorman who laid out the political reality of broadband, noting that the legislation is a one-time investment and the state has a $1.2 billion surplus. “(If you) don’t do it now, when will (you) ever do it?” he asked legislators.

The GMNP team was joined by the Margaret Anderson Kelliher, Chair of the Governor’s Broadband Task Force and former Speaker of the House, who also spoke in support of the legislation.