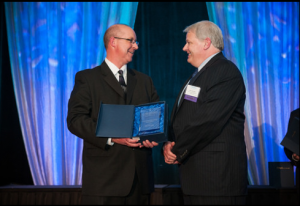 The GMNP was among the 27 honorees of Finance & Commerce’s Progress Minnesota awards, which recognize individuals, entrepreneurs, businesses and organizations that are driving economic growth and development in innovative ways. Executive Director Dorman accepted the award on behalf of the GMNP at a reception on April 10.

Finance & Commerce, a publication that covers business in Minnesota,  recognized the unique role the GMNP plays in Minnesota and listed some of its successes for those in attendance at the reception. In only its first year, the GMNP played an integral role in several initiatives designed to foster economic growth in Greater Minnesota. Some of the GMNP’s accomplishments mentioned included its work on the Greater Minnesota internship tax credit program and the Greater Minnesota  business expansion program, as well as work it did to help facilitiate positive changes to the state’s job creation fund.

The GMNP would like to thank Finance & Commerce for this award!