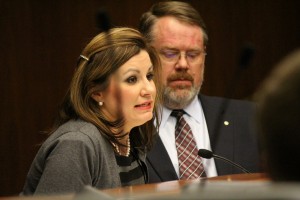 Rep. Mary Franson (R-Alexandria) testifies in support of legislation she authored to provide $20 million in funding for the Greater Minnesota Business Development Infrastructure (BDPI) Grant Program as Jerel Nelsen, community development director for the city of Staples, looks on.

GMNP Executive Director Dan Dorman, Coalition of Greater Minnesota Cities and Ely City Council member Heidi Omerza and Staples Community Development Director Jerel Nelsen testified in support of the legislation before the Greater Minnesota Economic and Workforce Development Policy Committee. The response from the committee was generally positive, but an urban legislator voiced concern about protecting the state’s investment in the BDPI program and issues with requiring DEED to fund 50 percent of the cost of a project. The GMNP believes projects in Greater Minnesota should be funded at 50 percent, much like metro projects that have received earmarks in the bonding bill.

The House bill will now move on to the Job Growth and Energy Affordability Policy and Finance Committee. The Senate companion bills, SF 763 and SF 386 (authored by Sen. Vicki Jensen, DFL-Owatonna) have not yet been scheduled for a hearing. However, the BDPI program was among the priorities cited by leading rural senators at the Senate Rural Task Force’s press conference earlier today.

Here is a press release from the Coalition of Greater Minnesota Cities regarding the BDPI legislation.