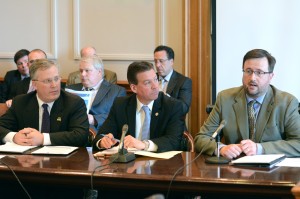 The GMNP’s workforce housing proposal is steadily making its way through the committee process and continues to be improved along the way. For example, rather than include two different tax credits, the bill has been amended to just one credit. Improvements like these are helping to make the bill stronger and better.

The Senate version of the bill, SF 764 (authored by Sen. Dan Sparks, DFL-Austin), received a hearing Monday in the State and Local Government Committee. GMNP Executive Director Dan Dorman was joined by Austin City Administrator Craig Clark and Worthington Director of Community/Economic Development Brad Chapulis in testifying in support of the bill and on the need for workforce housing in Greater Minnesota. The bill was met with a positive reception by the committee, who passed it on a voice vote.

SF 764’s next hearing is today in the Environment, Economic Development and Agriculture Committee.