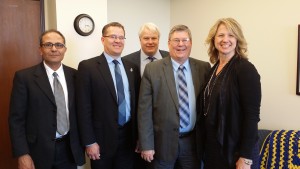 The group started the day meeting with Senate Tax Chair Rod Skoe (DFL-Clearbrook) and his staff and ended the day at the “I-90 Corridor Legislators” annual pork chop supper. In addition, the team met with most members of the Tax Conference Committee and other key legislators and staff. The workforce housing proposal was well received and legislators responded very well to the group message that we need to “defibrillate” market rate workforce housing and “jolt” the system in order to stimulate the economy in Greater Minnesota and help our cities prosper.