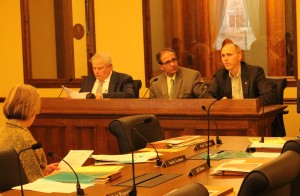 On Wednesday, members of the House Job Growth and Energy Affordability Committee heard testimony on two initiatives backed by the GMNP and Coalition of Greater Minnesota Cities.

First, the committee heard testimony on HF 653, authored by Rep. Bob Gunther (R-Fairmont), which would appropriate $15 million in state bonding funds to the Greater Minnesota Business Development Public Infrastructure (BDPI) Grant Program. BDPI is an extremely popular program that provides grants to cities of up to 50 percent of the capital costs of the public infrastructure required to expand or create new economic development projects. Due to its popularity, however, funding for BDPI is nearly depleted.

Marshall City Administrator Nicholas Johnson testified in favor of HF 653. Marshall currently has a BDPI application pending that would help the city build an industrial park anchored by RALCO Industries Inc. Johnson told the committee that BDPI funds are vital to Greater Minnesota communities by enabling cities to accommodate expansion of new and existing businesses. Committee Chairman Rep. Pat Garofalo (R-Farmington) spoke about BDPI’s long history of success, informing committee members that the program has a “proven track record” of over a decade.

The committee then heard testimony on the GMNP’s workforce housing bill, HF 1020, authored by Rep. Rod Hamilton (R-Mountain Lake). The bill creates a 40 percent tax credit as an incentive to encourage developers, investors and local businesses to support the construction of middle-income housing in Greater Minnesota.

Abraham Algadi, executive director of the Worthington Regional Economic Development Corporation, testified in favor of the bill. He told the committee that Worthington, like many communities, is ready and able to grow its middle-class workforce, but suffers from a shortage of middle-income housing. While there are several programs that assist low-income residents in obtaining housing, many workers in Greater Minnesota earn too much money to qualify. This legislation is aimed at addressing that need.

The committee responded favorably to both the BDPI and workforce housing tax credit bills. The BDPI bill was laid over possible inclusion in an upcoming omnibus bill, while the workforce housing bill passed out of the Jobs Committee and will now move to the Tax Committee.