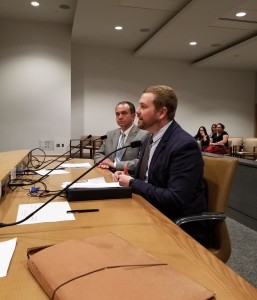 The Senate Agriculture, Rural Development and Housing Finance Committee held an informational hearing this week on the child care crisis. The hearing was originally scheduled to last only two hours, but it ended up extending another 90 minutes due to the amount testimony and discussion on the topic.

The hearing was chaired by Sen. Bill Weber (R-Luverne) who asked the GMNP and our sister organization, the Coalition of Greater Minnesota Cities, to testify and assist in finding others who could testify to the impact the child care crisis is having on economic development in Greater Minnesota. GMNP Executive Director Dan Dorman presented along with Scott Marquardt of the Southwest Initiative Foundation and Little Falls City Manager Jon Radermacher.

The largest portion of hearing was spent listening to child care providers talk about how regulations impact their businesses. The stories that the providers relayed to the committee were heart-wrenching and compelling. Many members of the committee were rather pointed in their criticisms of how the Department of Human Services addresses inspections.

Since this was just an informational hearing, no new legislation was discussed. However, the committee plans to hold additional hearings and hopes to positively impact the availability of child care in Greater Minnesota.