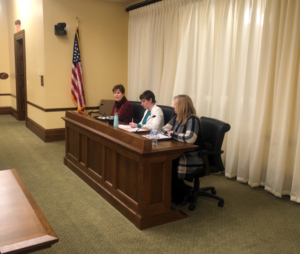 This week, the House took its first formal action on the proposed $500 million early childhood bill (HF1), which includes CGMC’s childcare priorities. On Tuesday, the House Early Childhood Finance and Policy Division took public testimony on the different parts of the proposal. Testifying on behalf of the GMNP and its partner organization the Coalition of Greater Minnesota Cities were Diana Anderson, president of the Southwest Initiative Foundation (SWIF), and Jenny Holweger, CEO of the Kandiyohi County Area Family YMCA.

Last year, the state appropriated a total of $750,000 to the six Minnesota Initiative Foundations (MIFS) for their childcare programs. Anderson shared how SWIF used those resources and the impact it has had on the childcare providers in the southwest region. She shared how the proposed $4 million for the MIFs included in HF1 will help all six foundations expand the work they are already doing, which will lead to more childcare providers coming into and staying in the industry.

In 2019, at the CGMC and GMNP’s behest, the Legislature also approved $750,000 in childcare grants to be distributed by DEED. Holweger testified about the impact that a $50,000 DEED grant had on the Y’s effort to build a new childcare center in Spicer. The state grant was leveraged against more than $700,000 in local contributions that ranged from $20 to $100,000. She shared that the proposed $10 million in new funding for 2020 will help communities across the state find solutions to their own unique childcare situations.

In addition to the proposed funding for childcare grants, HF1 proposes creating a uniform reimbursement rate across the state for families that qualify for the Child Care Assistance Program (CCAP). Currently, the rates range from $163 per week for an infant in Hennepin County for family care down to $100 for an infant in several Greater Minnesota counties. At the House’s “mini-session” in Winona in October 2019, representations from First Children’s Finance testified that the statewide cost variance for a family care setting is less than $2,000. However, the CCAP rates account for a much larger variance. Although the CCAP element of the House’s 2020 proposal has a large hill to climb this session, it is good to see legislators taking note of reimbursement inequities across the state.

HF1 passed out of the Early Childhood Committee on a party-line vote and is now headed to the Human Services Finance Committee. It will need to make stops at the Education Finance and Jobs committees before it ends up on the House floor.

If you have any questions about this issue, please contact GMNP lobbyist Scott McMahon at shmcmahon@flaherty-hood.com.