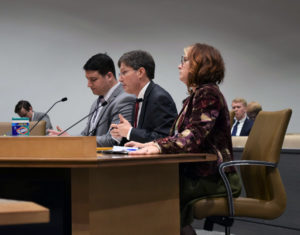 On Wednesday, the Senate Agriculture, Rural Development and Housing Finance Committee heard two of the three bills that the GMNP supports: SF 4102 (Greater Minnesota Fix-Up Fund) and SF 3784, both of which are authored by Sen. Kent Eken.

SF 4102, the Greater Minnesota Fix-Up Fund, is patterned after an existing fix-up program administered by the Minnesota Housing Finance Agency and the Federal Small Cities Grant Program. The program would send up to $200,000 to a city and require a $1 local match for every $2 in state grants. This bill would allow the rehabilitation of homes that might otherwise face the wrecking ball. A maximum grant of $75,000 ($50,000 in state and $25,000 in local dollars) could be used to help rehabilitate a home, which could then be sold and the proceeds used to fund additional rehab projects.

Melrose City Administrator Colleen Winter and Jackson Economic Development Coordinator Tom Nelson testified in support of the bill and provided examples of dozens of properties in their communities that would benefit from the program.

SF 3784 is would add $2 million in funding to the Greater Minnesota Workforce Housing Development Fund. It also changes the maximum amount of a grant from 25% to up to 50%. The reason for the increase to up to 50% is to off-set the increased costs of using the program. The primary driver of the increased costs in using the program is the state prevailing wage requirements that are triggered by housing grants of $100,000 or more. The issue is not the prevailing wage program itself, rather the $100,000 grant trigger that has been in statute since the early 90s. The change from 25% to 50% max grant would not be needed if the $100,000 was simply updated due to inflation. Building costs have more than doubled since the $100,000 limit was established.

Testifying in support of the bill were Austin City Administrator Craig Clark, Windom City Administrator Steve Nasby and Southwest Minnesota Housing Partnership CEO Chad Adams. All three made clear to the committee members that without the change brought forth in the bill, fewer and fewer applications for this program will come forward.

The bills were laid over for possible inclusion in the Agriculture, Rural Development and Housing Finance omnibus bill. They have not yet received a hearing in the House.

See this handout for more information on the housing-related bills that the GMNP supports this session.