Child care proposal continues to move through the House 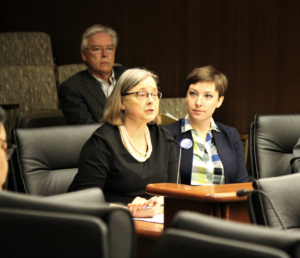 Nancy Jost of West Central Initiative talks about the work the Minnesota Initiative Foundations are doing to address child care needs in Greater Minnesota. She was joined by Rep. Carlie Kotyza-Witthuhn, chief author of HF 1.

HF1, the child care and early childhood education bill, continued its trip through the House on Thursday. Because of the various provisions included in the bill, five committees must approve it before it can head to the House floor. The bill originated in the Early Childhood Finance and Policy Division. It will need approval from the Human Services, K-12 Education, and Jobs and Workforce Development committees, before final approval by the Ways and Means Committee.

The bill was heard in the House Jobs and Economic Development Committee on Thursday. This was an important committee stop for CGMC because our two proposals—$10 million for the DEED child care grants and $4 million for the six Minnesota Initiative Foundations—are included in the portion of the bill that require approval by the Jobs Committee.

The Jobs Committee approved HF1 on a unanimous voice vote and sent it on to its next stop, the K-12 Finance Committee.