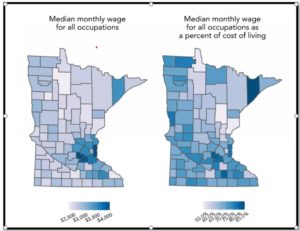 The maps show that once the cost of living is factored in for monthly wages, Greater Minnesota residents are spending a smaller percentage of their monthly wages on cost-of-living expenses.

Comparing wages across the state of Minnesota often shows that Greater Minnesota communities have lower median monthly wages. However, this may not show the whole picture. The Center for Rural Policy and Development recently published an article titled “Wages can go farther in greater Minnesota.”

This insight is beneficial to Greater Minnesota for a few reasons. According to the study, the data tool provided by the Center for Rural Policy can provide for a better understanding of the needs of a community. A demand for employees at high wages, along with job vacancy data, can inform a conversation between employers and economic development professionals to fill the workforce shortages in the region.

As always, there are caveats to these findings. Child care and housing are cited as two factors that bring down the cost of living for many Greater Minnesota communities; however, they are often scarce in availability and quality.